A fair exchange: A much needed computer in exchange for bird scaring lines to save seabirds! 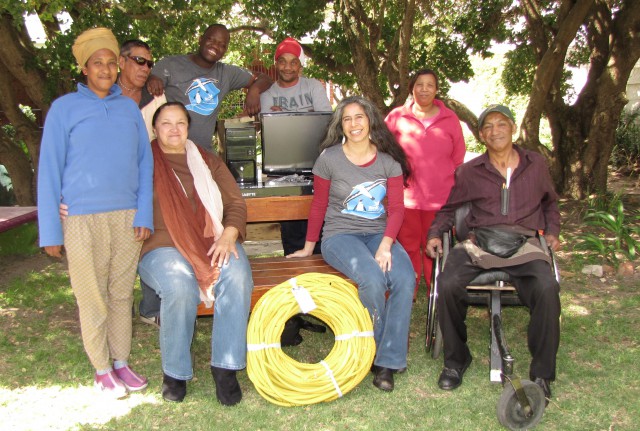 The Ocean View Association for People with Disabilities (OVAPD) centre has been given a boost in the form of a much-needed desktop computer. The centre runs the Tori Line project, which produces the bird-scaring lines used on fishing vessels to prevent seabirds from being killed.

After years of working on an old computer that was affecting both productivity and efficiency, Deborah Gonsalves, the manager of the OVAPD centre, was all smiles as she took possession of the new hardware. As part of the Albatross Task Force (ATF) programme, the Tori Line project produces a steady supply of bird-scaring lines that are made to standardised specifications for the fishing industry. A bird-scaring line consists of a main line with several streamers attached and is used in longline and trawl fisheries to scare seabirds away from dangerous fishing gear and prevent them from being killed by baited hooks or cables and nets.

Thanks to the generous sponsorship of the Rand Merchant Bank Environmental Fund, BirdLife South Africa helps the OVAPD centre by providing materials and a market for their product. The new computer will make a valuable contribution to the management of this project, not least for the hard-working team of individuals with disabilities who make the lines.

The use of bird-scaring lines has been compulsory in three major fisheries in South Africa since 2006. Figures produced by BirdLife South Africa have shown that these lines have been directly responsible for the reduction in seabird deaths by a staggering 99% – and that’s in the demersal hake trawl fishery alone!

One member of the Tori Line project, 58-year-old Aubrey Laguma, had to give up fishing when he was injured. Having moved to Ocean View, he has found a connection to his former life – and an income – while making a difference for albatrosses. ‘I am so proud of myself [for making these lines], but I can’t feel that alone – we’re a team here,’ he says.

For more information about the ATF programme or the OVAPD centre, e-mail andrea.angel@birdlife.org.za