The Avitourism Project is involved in supporting avitourism throughout South Africa through the training of community bird guides, maintaining a network of BirdLife South Africa Recommended Accommodations, Tour Operators, and Course Providers, overseeing the Birding Routes and the Go Birding online platform, the South Africa Listers’ Club, and by promoting birding in South Africa locally and abroad.
Click the buttons below to read more about each component of the Avitourism Project.

The Centre is situated within the Grassland Important Bird and Biodiversity Area (IBA), which has been recognised by BirdLife South Africa and BirdLife International as both a national (SA 125) and global (ZA 016) IBA. It is also regarded as one of the highest priority IBAs in South Africa. The Centre is located on 114ha of grassland adjoining the internationally-renowned Wakkerstroom Wetland. The surrounding area is home to many globally-threatened bird species such as African Marsh Harrier, Grey Crowned Crane, Rudd’s and Botha’s Lark and Yellow-breasted Pipit.

The Centre has magnificent views of the wetland from all three accommodation blocks, including a large verandah leading off the conference centre where one can enjoy a cup of coffee while welcoming the morning sun or a sundowner at the end of the day!

With bird specials ticked and/or photographed, lay your head down at our accommodation facilities, with the option of en-suite guest rooms, dormitories or camping/caravan sites.

Conference facilities are offered at the Centre at unbeatable prices. What better venue can there be for a conference or meeting?

There are two bird hides on the Western side of the wetland, namely the Crane Hide and Iain Drummond Memorial Hide. Here you can catch a glimpse of the water birds and waders. Another two hides are located on the Northern side of the wetland, namely the Clive Beck Hide and the WOW (Wings over Wetlands) Hide. The WOW Hide was completed in 2010 with funds from the Wings over Wetlands Programme.

Not too sure where to find those elusive species? Why not employ the services of one of the community bird guides? Contact Daphne Pyott on wakkerstroom@birdlife.org.za or 071 718 1566.

So whether you are a keen birder or simply love the outdoors, pay us a visit at the centre of endemism – you won’t be sorry. “There is nothing dull about Wakkerstroom”

For more information and bookings, please contact Daphne Pyott on wakkerstroom@birdlife.org.za or 071 718 1566

The aim of this Expanded Public Works Programme (EPWP) is to alleviate poverty and for the recipients to gather additional and employable skills. Currently, the programme employs approximately 5000 young men and women in 200 teams across the country. After passing a rigorous fitness test, the trainees are sent on a 21 day training course. With the employed youth component sitting at approximately 85%, this programme definitely assists in developing skills in our country’s youngsters. The Wakkerstroom team has been based at the BirdLife South Africa Wakkerstroom Tourism and Education Centre since June 2014 with Kristi Garland as the Base Manager. This team of 25 firefighters has not only been of service to the broader community during the fire season, but during the summer months as well. They are able to assist in alien plant removal, erosion control and the like.

As part of their service to the community, regular school programmes are implemented as well as door to door awareness campaigns. In 2015, the Wakkerstroom team won the title of ‘Most awareness campaigns run in the year”. Through Integrated Fire Management (IFM) practices the team is able to control fires to enhance the sustainability and protection of life, and the environment. These IFM practices support the National Veld and Forest Fire Act No. 101 of 1998 which aims at preventing and controlling veld, forest and mountain fires throughout the country. WoFinactionThis Act applies to you if you own, lease or control land and if a fire can start, burn on or spread from your land. You have the responsibility to prepare and maintain firebreaks between your land and any adjoining properties. Locally, the Fire Protection Association (FPA), based in Volksrust, assists its members with carrying out this act. They are responsible for developing a fire management strategy, appointing a Fire Protection Officer, the training of its members as well as drawing up binding rules for all its members.

Together with Working on Fire and the FPA, our community has a great resource for fighting those all consuming fires. Preparing and fighting potential fires in our area has never been made easier. As the community, you can make use of the Working on Fire team throughout the year. Being a member of the local FPA, the cost of using the team is greatly reduced, as labour is covered by the membership fee and only a variable cost (fuel and transport etc) will be incurred. Non-members will be liable for all costs incurred should they request the use of the team. 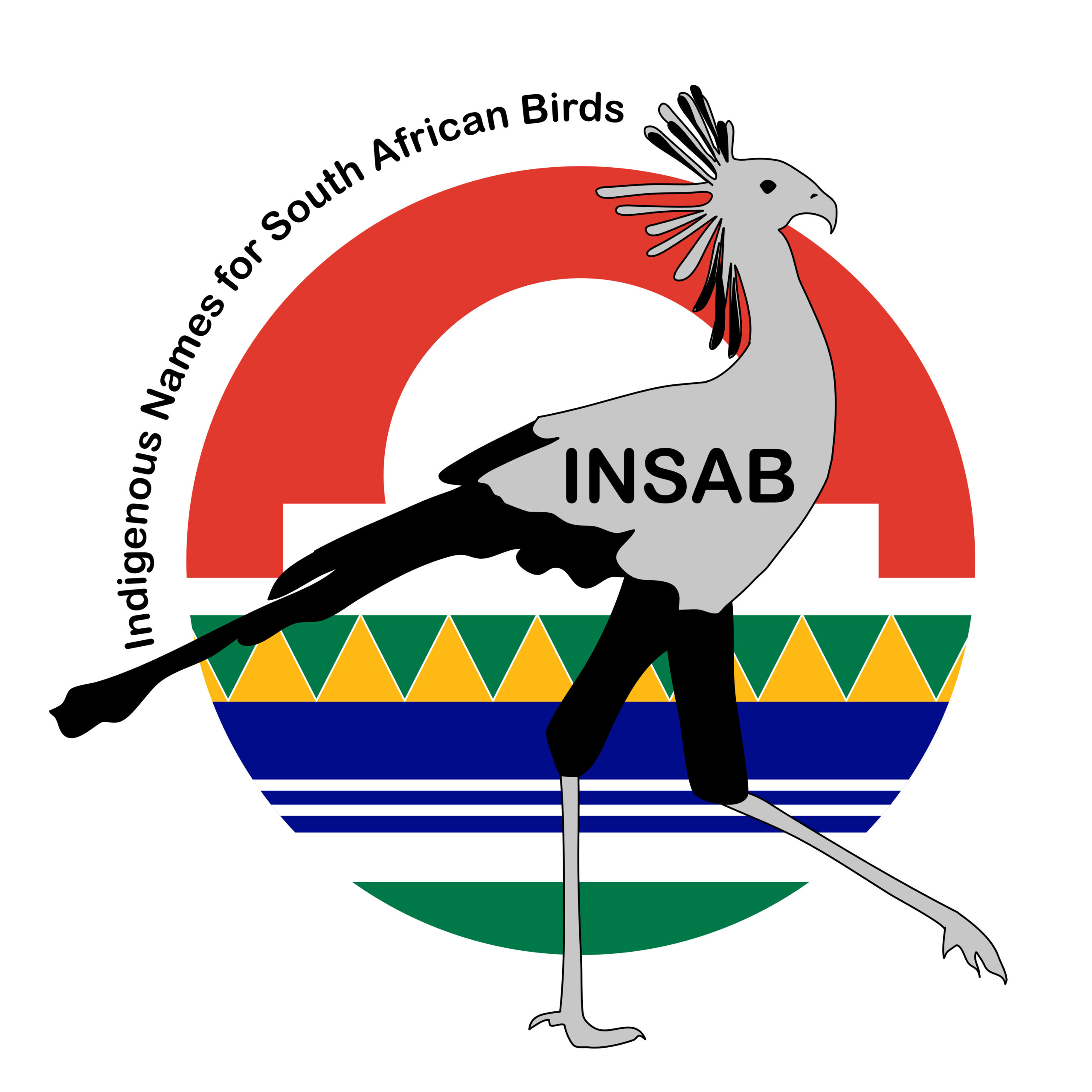 A new and ambitious working group, Indigenous Names for South African Birds (INSAB), has been established to produce a list of bird names in traditional South African languages. This will help a broader sector of South Africans to appreciate and conserve our birds and their habitats.

The names you will be familiar with in bird books, e.g. Cape Rockjumper, did not evolve naturally. They were standardised at some point in the past, and the process is ongoing as taxonomic updates continue to frustrate birders. The standardisation is now done at international level for languages such as English, French, and Spanish. Locally, the Afrikaans Voëlnaamgroep (Bird Name Group) standardised the regional list of Afrikaans bird names.

For the other languages, generic names for a lot of bird groups exist, but almost no species-specific names exist. Various linguists have recorded traditional names, but more for language studies than really to standardise the names. Most young speakers of African languages do not know the names of birds in their own language. This could lead to names being lost as time goes by, which makes the mandate of this new committee an urgent one.

Building on the work of the broader African Bird Names Group, the INSAB will bring together and facilitate people doing research on bird names, ornithologists, linguists, and, most importantly, those birders traditionally speaking the languages. In this way, each species name should reflect the language and culture of the people that speak these as home languages. There are opportunities for researchers to publish books and research articles for those wishing to get involved.

The last few months have seen the initiation of a formal working group to assign names in South African languages to all the species listed in the South African Checklist of Birds (maintained by Dr. Chris Lotz, Chairperson of the National List Committee). In the first meeting in August 2021, Dr. Johan Meyer was appointed chair of this new committee. The main aim of the committee will be to oversee language-specific working groups that have the ambitious aim to assign a preferred name to all South Africa’s bird species. Furthermore, with time, the group aims to do this for all 9 African languages of South Africa. This may sound like an easy task, but that is far from the case. Consider that many bird species occur in parts of the country where traditionally the languages have not been spoken. Furthermore, many species carry a group name, and contrasting to this is that some species have many names due to regional dialects.

The rich birdlife of South Africa can only be appreciated and conserved by everyone if there exists a unique name for each bird of the region in the various South African languages. The goal of the committee is just this: to ensure that each bird species in Southern Africa has a species-specific name in all the official languages. While this may sound like an easy task, one cannot simply translate names from English to other languages. The new names need to originate from those that speak the languages, are familiar with the birds, and the names need to capture the essence of the birds in the relevant culture. The process needs to be guided by language specialists. This involves teams of people and lots of discussion and lots of time.

In order to achieve the primary goal, the group will initially focus on Zulu, facilitated by Professor Adrian Koopman, and Northern Sotho, facilitated by Lucas Namanyane and Johan Meyer.

If anybody with a knowledge of bird names in any of the African languages of the region would like to help us, they can contact Johan at meyer.ij@gmail.com. Let us make conservation local!