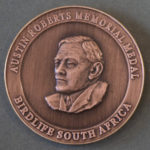 This award is named after Austin Roberts (1883-1948) who, more than 60 years after his death, remains a household name thanks to the range of bird-books that carry his name. Austin Roberts was one of the co-founders and mainstays of BirdLife South Africa’s predecessor, the Southern African Ornithological Society; he was the society’s first treasurer and later its secretary and he edited the society’s journal, Ostrich, from its inception until his death. Austin Roberts also played an untiring role in the later years of his life in promoting the conservation of birds.

The Austin Roberts Memorial Award has been established to honour people who have made a significant contribution to bird conservation in South Africa.

The award is open to both professionals employed in the conservation field and to non-professionals who have voluntarily applied their time, skills and talents to the benefit of bird conservation.

BirdLife South Africa will send out an annual notification inviting and announcing the closing date for nominations for the  Austin Roberts Memorial Award each year.

Enquiries can be sent to isabel.human@birdlife.org.za