BirdLife South Africa’s cutting-edge Conservation Modelling Project can track environmental change across landscapes and monitor the past, present and potential future responses of species or habitats to changes in land cover and climate.

Our Conservation Modelling Project has developed cutting-edge research that enables us to assess and monitor the state of South Africa’s ecosystems and habitats. By identifying core sites that form the base of resilient ecological networks, we enable conservation practitioners and land managers to develop and implement scientifically robust initiatives that promote positive change. This project aims to develop habitat suitability maps for all threatened and endemic species (ca. 96), including Rudd’s, Botha’s, Red and Barlow’s lark, Yellow-breasted Pipit, Southern Bald Ibis, Ludwig’s Bustard, Lesser Flamingo, Black Stork and White-backed Vulture, among other species. The habitat suitability models created will provide further understanding of the presence and state of threatened and endemic species hotspots, guide and direct our conservation efforts for threatened habitats and species, as well as promote sustainable development and representative conservation planning with regard to avian species. 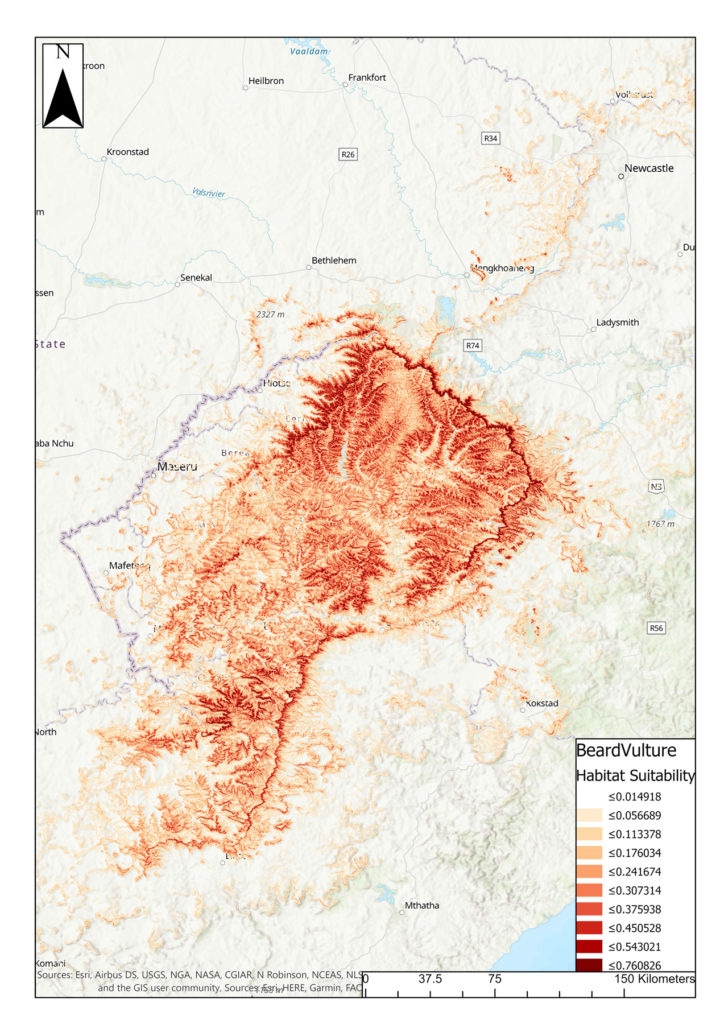 Accurate bird data tells you if conservation efforts are effective, and if not, decisions can be taken to adapt conservation strategies.

South Africa has a well-developed spatial planning sector, which primarily aims to plan and delineate land-use in South Africa. The spatial planning project aims to provide accurate spatial data to this sector which can then feed into various conservation planning tools such as Critical Biodiversity Areas. These maps form the basis for regional planning and it is therefore crucial that avian spatial data are included in these datasets. By combining species distribution models and data from the Southern African Bird Atlas project, fine scale maps are created which comply with the standards as set in legislation and guideline documents. 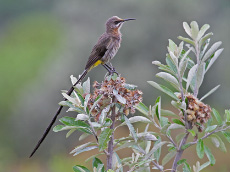 BirdLife South Africa plans to launch an annotated checklist series which contains population and other key information for focal areas such as nature reserves and national parks. All the above- mentioned work can only be done effectively by remaining updated with recent taxonomies. BirdLife South Africa therefore, through the work of the BirdLife South Africa List Committee, each year publish checklists of the birds occurring in South Africa. These lists are published in both English and Afrikaans, and can be downloaded here. In addition, you can also download a list of all the global and regional threatened bird species, as well as the endemic and near-endemic birds occurring across South Africa.

The Grassland Biome is the most threatened biome in South Africa, having experienced rapid rates of habitat loss, fragmentation, and degradation over recent times. A specific grassland type known to host several threatened and endemic bird species, namely highland grassland, occurs at higher elevations across South Africa, Lesotho and Eswatini. Several of the endemic bird species found within this grassland type are very poorly represented within conservation networks and have very little data related to current population status, trend, and distribution. 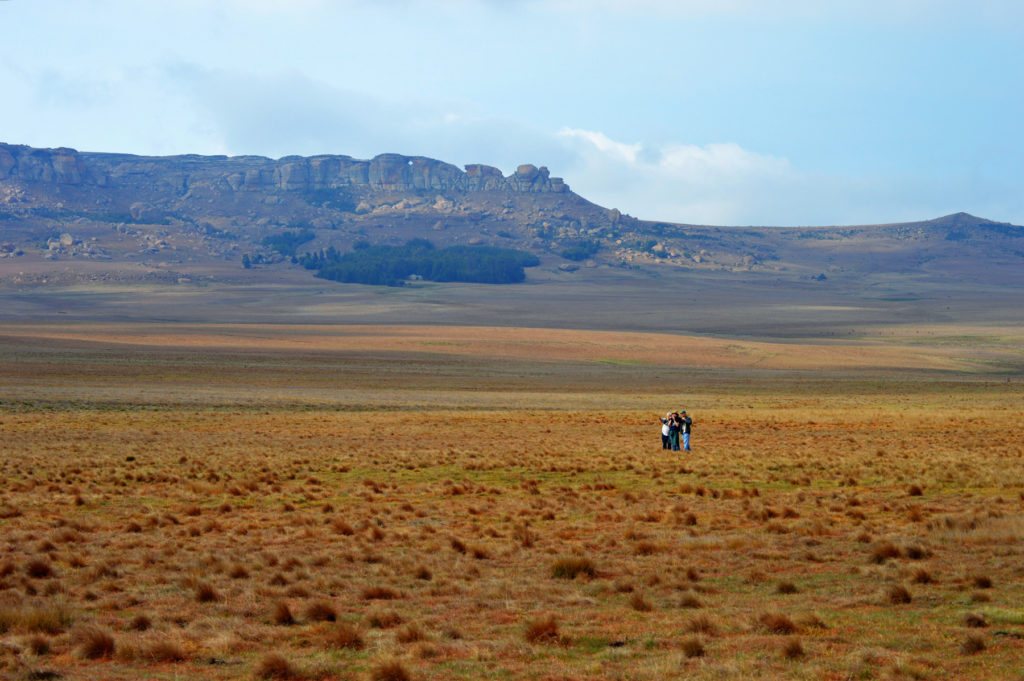 BirdLife South Africa are currently using a combination of ecological modelling , remote sensing and extensive field surveys to address key conservation concerns and data deficiencies related to three highly localised and threatened highland grassland species, namely Endangered Rudd’s Lark, Endangered Botha’s Lark and Vulnerable Yellow-breasted Pipit. These three species represent the most localised and threatened grassland passerine species and are being used as flagship species for grassland conservation. Research is focused at understanding the population status, distribution, and habitat/management requirements of these species. From these research findings, we aim to identify core habitats and areas that require conservation attention and protection in order to promote the persistence of these threatened species. 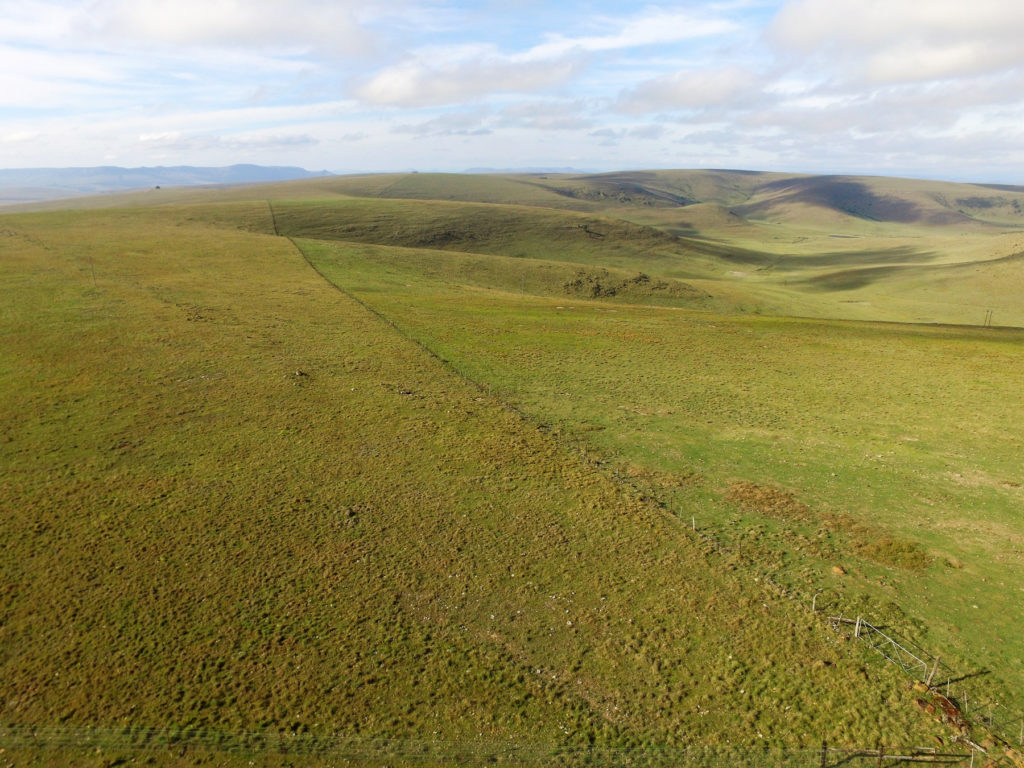 Rudd’s Lark, Botha’s Lark and Yellow-breasted Pipit are habitat specialists within highland grassland habitats. All three species favour good quality grassland that has not been degraded through over-grazing and too frequent burning. Previous misconceptions regarded these species as favouring degraded grassland, but our study has shown that well managed climax grassland that are neither over- nor under-grazed (moribund) are essential for species presence.

All three species are restricted to high altitude grasslands, which when combined with their specialised habitat requirements results in a patchily distributed range. All three species have core ranges within southern Mpumalanga and parts of eastern Free State, whilst Yellow-breasted Pipit is more widely distributed across parts of KwaZulu-Natal, central Mpumalanga and Eastern Cape. Our study has recently elucidated new Rudd’s Lark sub-populations across parts of Eastern Cape, which could contribute significantly to the persistence of the species in this southern extent of its range. 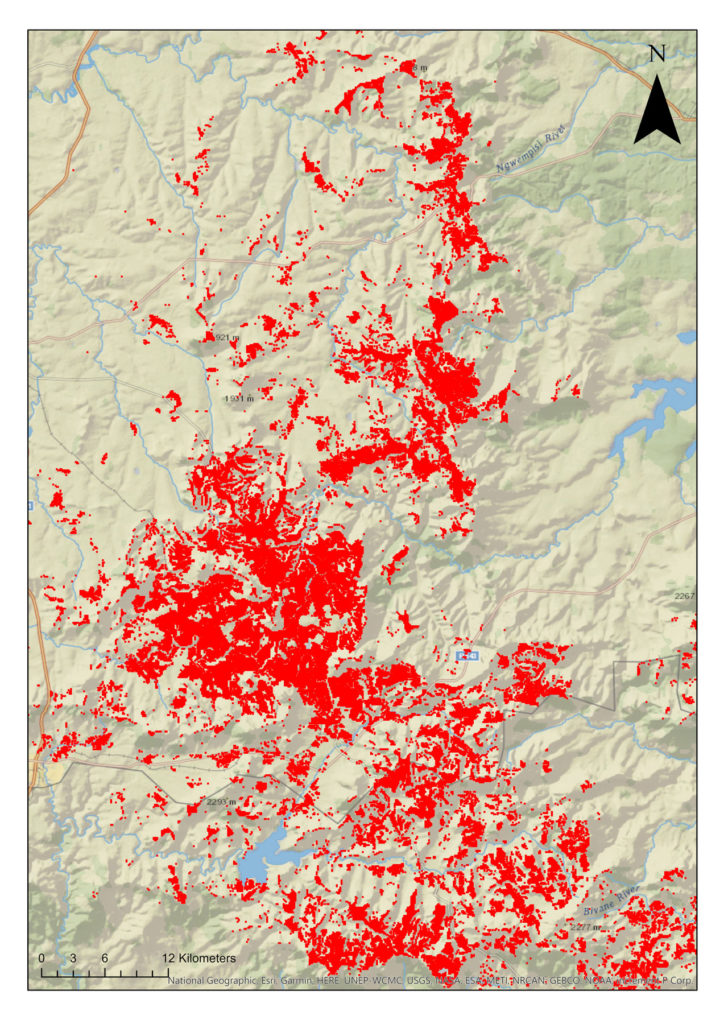 The primary threats facing these endemic species include habitat loss, degradation, and fragmentation. For species that are naturally constrained within a very limited distribution and habitat type, ongoing loss and deterioration of habitat greatly increases the associated extinction risk. Furthermore, recent studies have indicated that high altitude alpine species, such as these highland grassland species, are more vulnerable to the impacts of climate change.

By understanding the current and potential future (i.e. climate change) threats, we aim to drive conservation initiative that mitigate these threats and promote the conservation of these highly threatened species. As such, securing viable patches of remaining habitat is of crucial importance, along with encouraging the correct management of land hosting the species in order to maintain appropriate habitat quality.

Project aims/activities:
– Conduct a global assessment of the current status of this species across its range to
better inform conservation measures undertaken.
– Assess the rate of habitat loss for this species over recent times (1999 – 2017), as well
as potential future loss through climate change.
– Develop a conservation network for this species incorporating the core sites that have
remained most stable and could allow the species to persist.
– Implement stewardship initiatives to provide conservation protection for any core
sites that are not situated within existing protected areas. 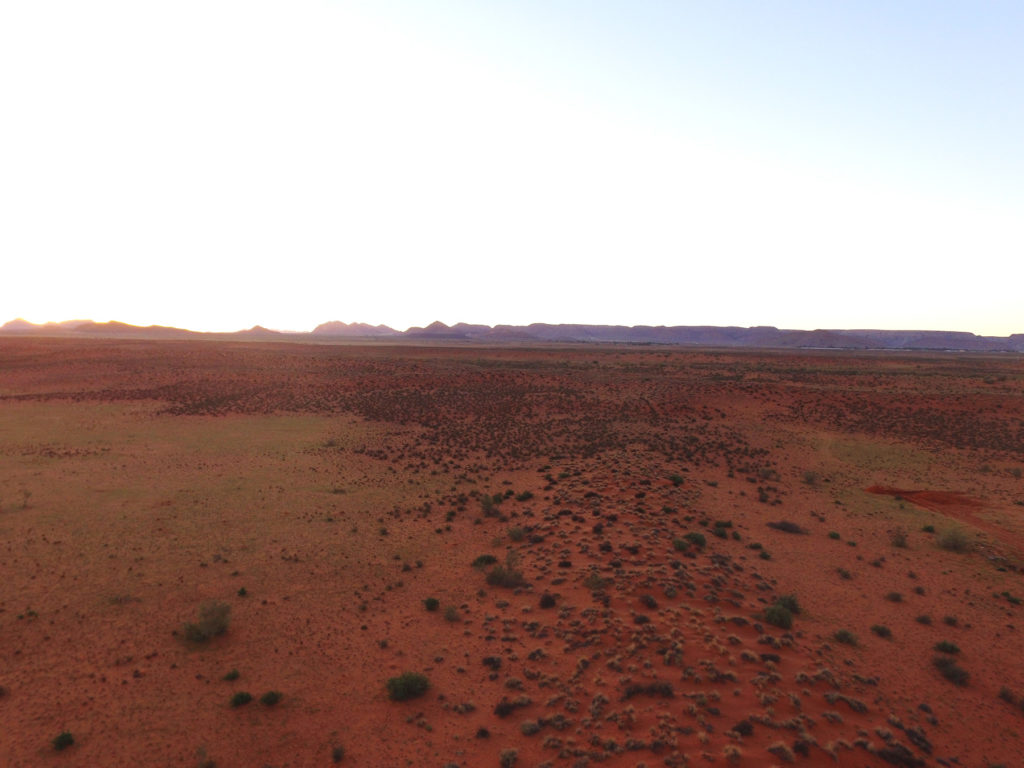 The arid region of South Africa is known to host several highly specialised and range-restricted avian species. The globally threatened Red Lark is one such species that is completely confined to specialised habitat within the Northern Cape province of South Africa. Unfortunately, the population trend, status, and actual distribution of many of these species are not known. Considering the potential impact of climate change on this arid environment and the recent swell in development
taking place across this region, it is crucial that gaps related to these species are filled in order to direct conservation initiatives effectively. 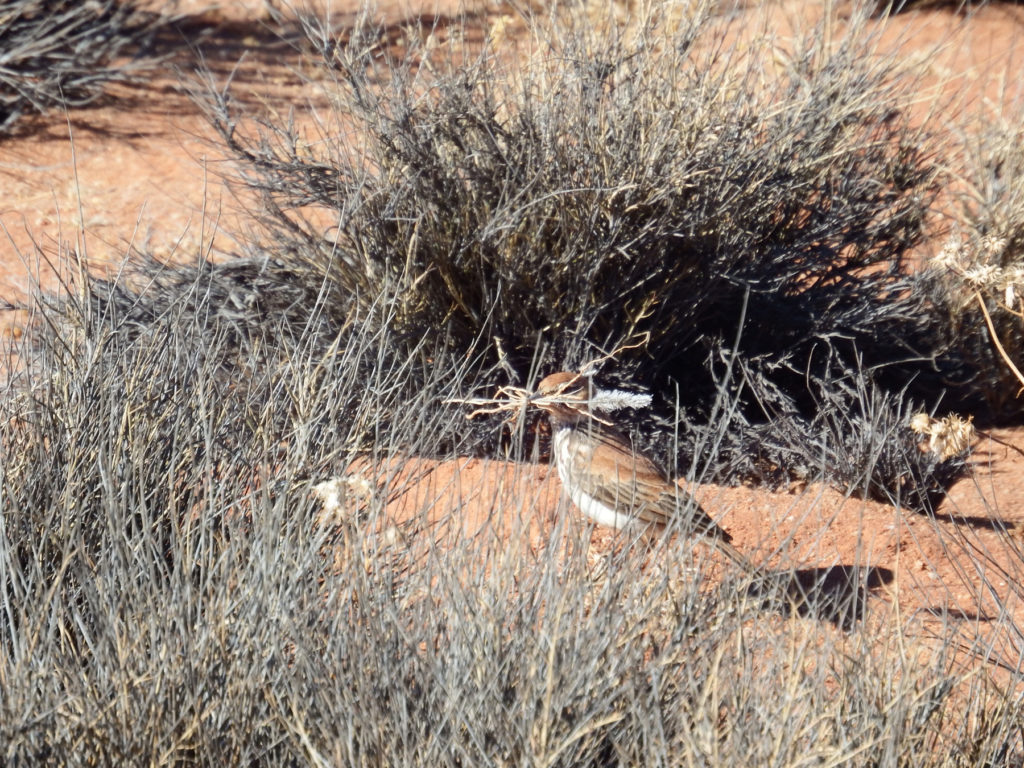 As part of a BirdLife South Africa and Fitzpatrick Institute of African Ornithology collaboration, a research project was initiated in 2018 on focal arid lark species. The project is focused on threatened and endemic larks within the Nama Karoo ecosystem, with the aim of establishing the population status and distribution of focal species. Surveys include largely sedentary species like Red Lark and highly nomadic species such as Scalter’s Lark, Stark Lark and Black-eared Sparrow-lark. In addition to addressing current data deficiencies, we hope to design a conservation network for these species that more appropriately represents and accommodates them. 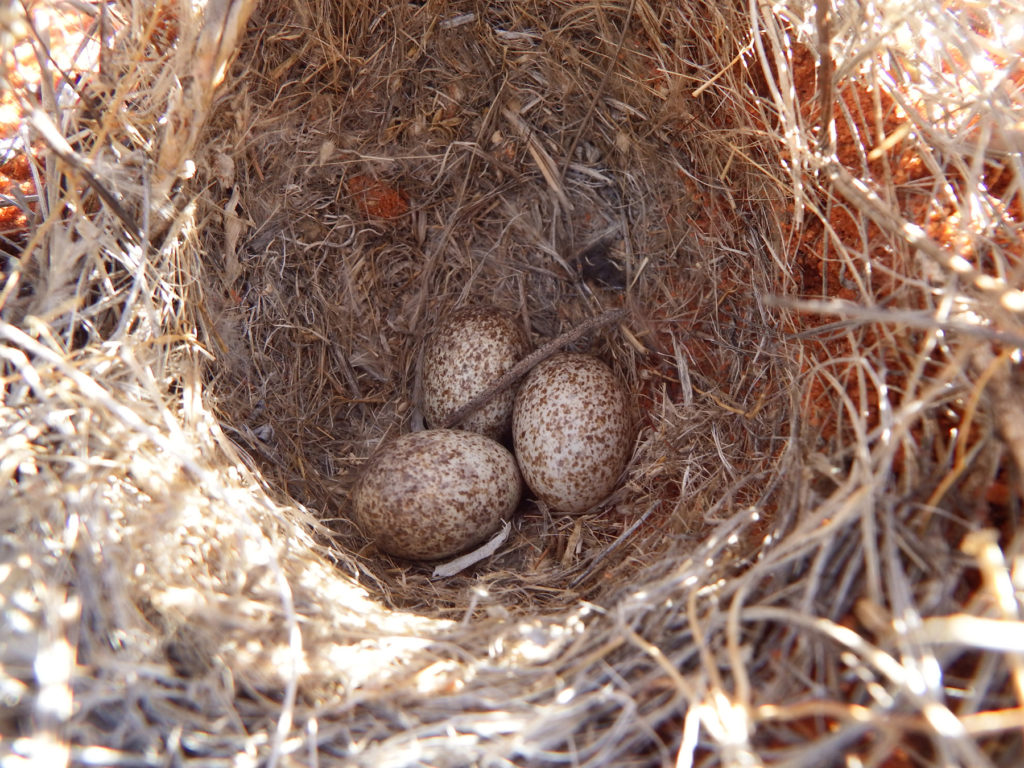 Through a combination of field surveys, remote sensing, and spatial modelling the current distribution and micro-habitat preference of focal arid larks are being assessed. By incorporating a varied habitat specialist species into our surveys, we hope to incorporate a diversity of core habitat types within the conservation network being designed. Species specialisation being studied include Red Lark which require a larger proportion of sandy soil with tall shrub and grass components, to Stark’s Lark that can inhabit a wider variety of sparsely vegetated sandy or gravelly habitat and Sclater’s Lark which have an association with gravelly plains with specific shrub cover. Habitat characteristics constituting breeding and foraging habitat are being assessed and will help inform the delineation of core habitat patches for these species requiring conservation.

These highly specialised and range-restricted species face a myriad of threats within this arid ecosystem, particularly considering rapidly changing landscapes and climate. The potential impact of climate change across this region is of particular concern and our study hopes to identify and conserve those areas least likely to be impacted. Furthermore, a recent increase in renewable energy development across the broader Northern Cape has occurred and we aim to assess the vulnerability of focal species to such development.

– Conduct a global assessment of the current status of this species across its range to better inform conservation measures undertaken.
– Develop a conservation network for this species incorporating the core sites that have remained most stable and could allow the species to persist.
– Implement stewardship initiatives to provide conservation protection for any core sites that are not situated within existing protected areas. 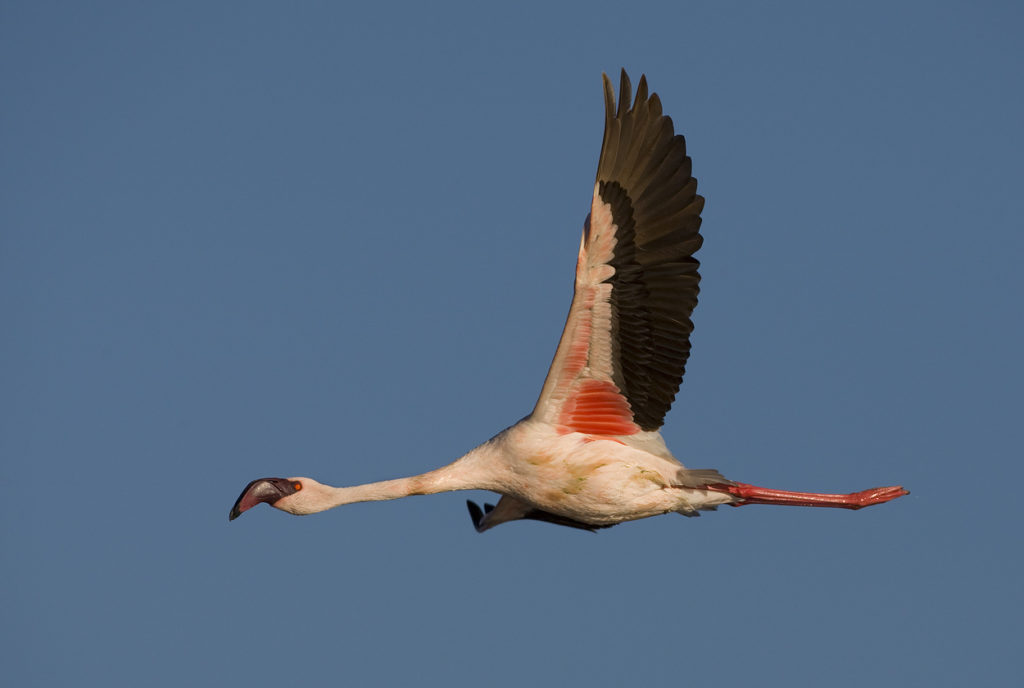 The Near Threatened Lesser Flamingo inhabits the harsh environments of shallow, eutrophic, open and saline water bodies such as salt pans and coastal estuaries or lagoons. It occurs across sub- Saharan Africa and in India. In Africa it only breeds at four localities with any regularity – Lake Natron (Tanzania), Etosha Pan (Namibia), Sua Pan (Botswana) and Kamfers Dam in Kimberley. 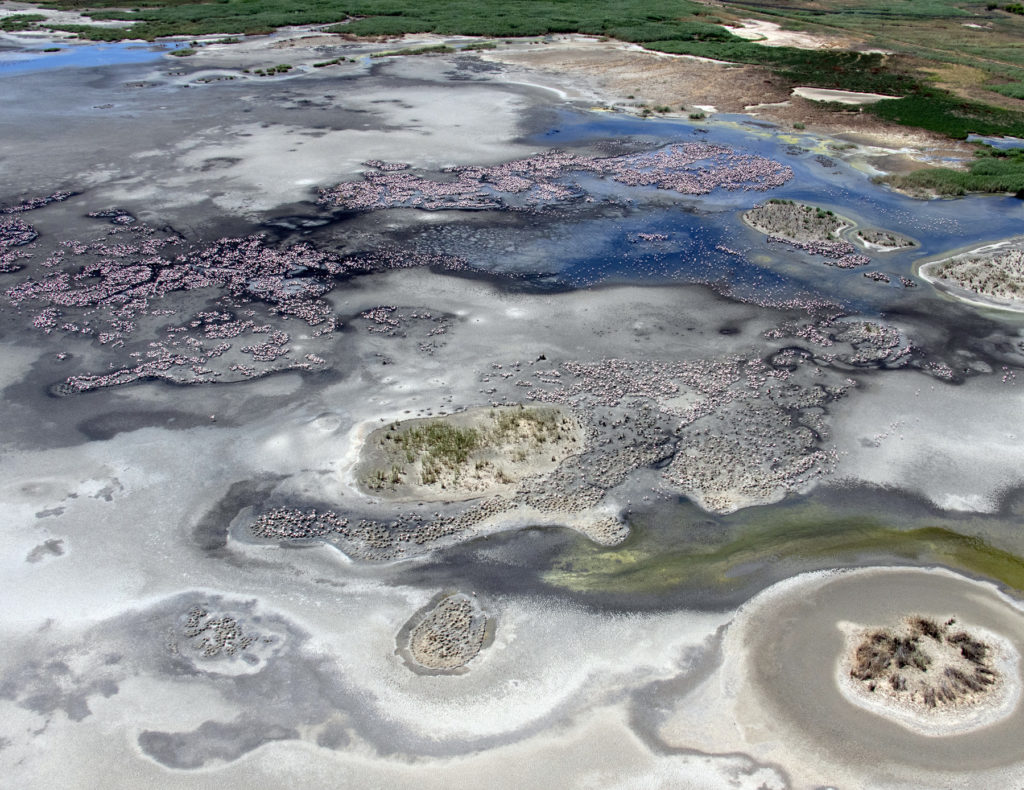 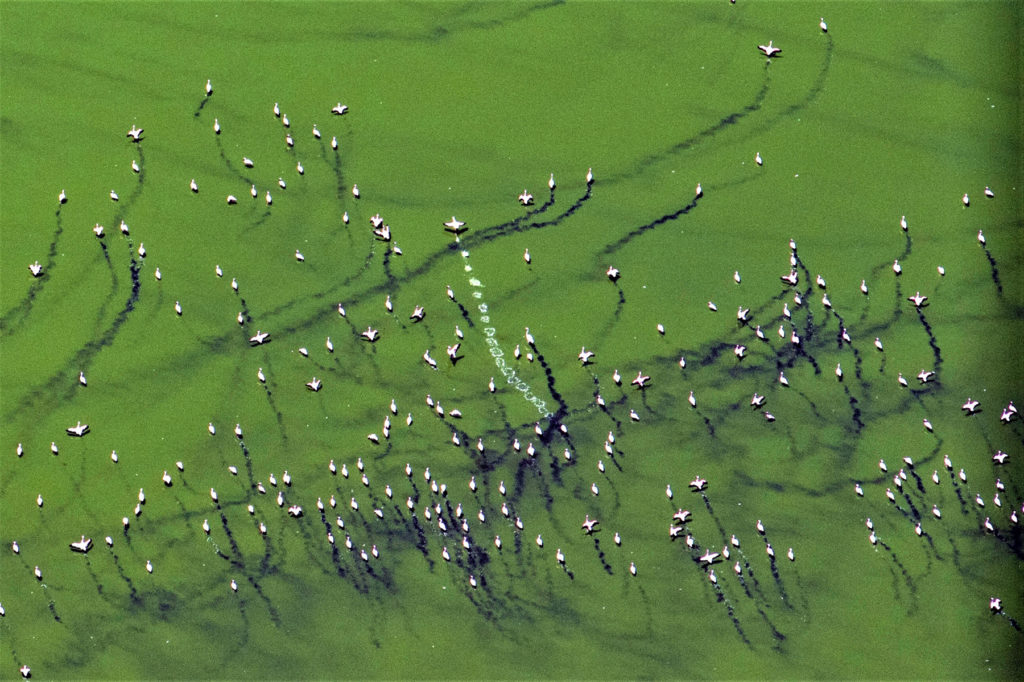 The Science and Innovation Programme currently drives the development of two primary products aimed at promoting Lesser Flamingo conservation, namely habitat mapping and abundance estimation. By using a combination of field data, water tests/analysis and satellite imagery the project has developed and aims to refine a habitat tool that can map the presence and state of suitable foraging habitat, namely water bodies with appropriate food sources (i.e. cyanobacteria). Furthermore, in order to address the current shortfall related to estimating the population status and trend, the project has been developing a method of deriving population estimates from various forms of imagery. This product us currently being refined and once complete, would provide a rapid, reliable, and scalable method of estimating the state and trend of this threatened species.