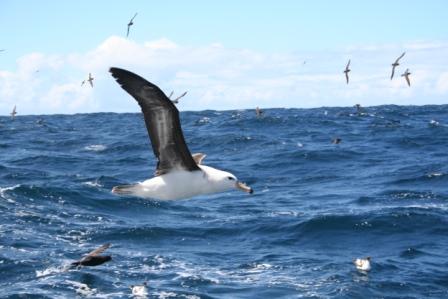 For the Seabird Conservation Programme, 2016 has been a year of steady progress on existing work and expansion into new areas. Our staff also grew to 11 in Cape Town, with two others in West Africa – a great boost to productivity.

At the Seabird Conservation Programme we were fortunate to have our major donors for penguins, the Albatross Task Force (ATF) and our international policy and advocacy work staying with us through 2016. Our Penguin Patron, Pamela Isdell, recommitted funding for new penguin colonies, while the Charl van der Merwe Trust’s generous support to Taryn Morris enabled her to make significant progress in her dealings with fisheries stock modellers. The RSPB continued its support for our ATF team and partial funding for the Africa Coordinator for the BirdLife International Marine Programme. And although 2016 was not a year of massive breakthroughs, it did see good progress and some expansion into new areas. In addition, the staff of the Seabird Conservation Programme increased to 11 in Cape Town, plus two in West Africa who report to Ross Wanless.

Although our number grew to 10 in February, we began to fall behind in several administrative and logistical matters. So we were very happy to welcome Nini van der Merwe as an assistant to the whole team. We also made a pledge with the African–Eurasian Waterbird Agreement to coordinate the Benguela-endemic seabird action plan. Nini will take on that task, which we expect to get going in earnest in 2017.

The biggest impact on our work has undoubtedly been the Common Oceans Tuna Project, which is implemented by the UN’s Food and Agriculture Organization (FAO). An extension of sorts to the ATF, it focuses on reducing seabird by-catch by high-seas tuna fleets. Although this work started in 2014 and picked up momentum in 2015, it was only this year that we were able to get three warm bodies in position. The support we’ve received from the FAO has been amazing – and the work continues to progress, bringing together scientists, data and fleets to improve our understanding of seabird by-catch on the high seas – and how to reduce it most effectively.

Not to be outdone, the ATF team has overseen the strengthening of its activities in Namibia, initially under Bronwyn Maree and now led by Andrea Angel. Our work was instrumental in getting regulations passed last year for Namibia’s trawl and longline fleets, marking the beginning of the end to the carnage of more than 30 000 seabirds every year in those fisheries. Because of the close link between the ATF and Common Oceans Tuna Project, the latter was able to employ an instructor to investigate seabird by-catch in Namibia’s pelagic longline fleet, whose range overlaps with the ranges of Tristan and Atlantic Yellow-nosed albatrosses.

Ross Wanless’s efforts in the marine IBA programme in West Africa (the ‘Alcyon Project’) grew significantly this year as the MAVA Foundation, which funds Alcyon, decided to expand its work and identified BirdLife as the only credible partner to lead the seabird conservation elements of its new objectives. Taking the ATF model to West Africa and integrating marine IBAs into other work areas (such as spatial planning and oil and gas exploration) is a very exciting opportunity for the future, but it has meant a massive amount of planning and workshopping for Ross and his team in Senegal.

Advocating for our birds and their habitats
December 12, 2016
Categories
Search
Recent Blog Posts
Go to Top
Protect yourself and others by staying at home. For more information and support on COVID-19 please visit www.sacoronavirus.co.za