On the road with Ross 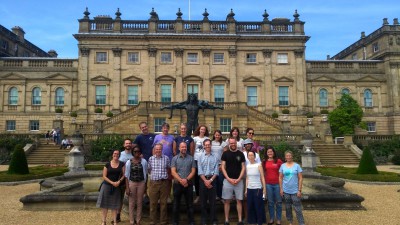 The BirdLife International Marine Programme team, plus a few extras, at Harewood House.

It took two and a half weeks to crank through the staggering number of things to be done on my trip to the UK in July. The first stop was Cambridge for a series of meetings and events about the plans to eradicate mice from Gough and Marion islands. That process continued later in the trip, but in the meantime my next destination was Rome. With time to kill in England before flying to Italy, a friend organised tickets to watch day 4 of the first Test between South Africa and England at Lords. It was amazing, and a bucket-list wish ticked! Although we lost, it was wonderful to be at the home of cricket, to watch the Proteas and to witness 17 wickets fall in a single day!

In Rome I was presenting on the progress of our pelagic seabird bycatch project, which is part of the Common Oceans initiative overseen by the UN Food and Agriculture Organization. The reporting back was painless and our request for additional resources was approved! The meeting ended with a discussion about future project concepts for ‘Common Oceans 2’, but nothing concrete has been decided. This is a bit worrying, as we’re only two years from the end of the current project.

My itinerary then took me back to the UK, this time to Dundee for the tail end of a conference about invasive species on islands that gave me a chance to square away more details of the mouse eradication work plans. All good, and while I was there the RSPB team asked me to participate in a meeting to consider the way forward for dealing with the invasive Sagina weed at Gough Island. After that I was free, and as there are several ‘UK’ birds that are found – or are accessible – only in Scotland and are within striking distance of Dundee, I set off.

The landscape, although transformed, was still visually appealing, but the birding was desultory, largely because the gale-force winds in the lower elevations translated into really unplayable wind in the highlands, where Black Grouse and Snow Buntings lurk. With just one species (Red Grouse) added to my life list, I gave up and meandered down to Leeds, where I joined my colleagues at a rather special venue. Ben Lascelles, the former marine IBA coordinator, left the team last year to take up managing his family’s estate. It turns out that he is landed gentry and related to royalty, and the estate is Harewood House. The exquisite 18th-century mansion is in beautiful condition and has period fittings, amazing art and some great modern touches. Better still, Ben is turning out craft beers and gins – exactly what a good BIMP team meeting on a country estate requires!

On the Road with Ross
November 21, 2016
Categories
Search
Recent Blog Posts
Go to Top
Protect yourself and others by staying at home. For more information and support on COVID-19 please visit www.sacoronavirus.co.za