On the high seas 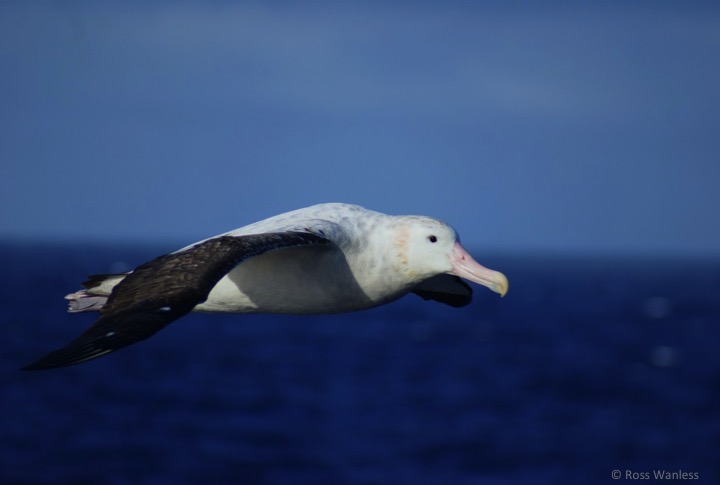 Out on the limitless ocean
Nothing to see but the waves:
Ever changing, peaking, subsiding,
All the same but each detail different.
Cairns upon hills upon mountains,
Rolling, swirling, constantly in motion.
Now smooth, now rough,
Now blue, now white,
Wind whipping the spray along.
Then, from far off comes serenity,
A Wandering Albatross, majestically huge.
Black and white, lord of the ocean,
Never hurried, never flapping,
Effortlessly soaring over the busy waves.
It skims the crest, banks its wings,
And in an instant soars high in the air.
Turns its head almost in disdain:
Such mastery of the air is so easy.
It turns again and speeds down the swell
Disappears in a churned-up trough
Triumphantly rises again far distant
Weightlessly hanging in the air
Its wings impossibly vertical.
Then it flashes by the chaotic waves
But unhurriedly, effortlessly
Time is irrelevant.
The albatross sees a ship:
An ungainly lumbering giant,
Chooses to examine the intrusion,
Draws near along the churning wake.
It sees the birders – hundreds of glass eyes
Admiring the spectacle of the lord.
Then the albatross flicks a wing
As if to say this is simply how I live
And in a moment it is gone
Flashing white over the distant swells.
The ocean continues its busyness
Constantly rearranging, never still.
Yet something profound has happened:
Those privileged birders have been touched.
For to watch such a wild creature
Magnificently at ease in its environment
Unencumbered by earthly cares
Is to truly know what freedom is.