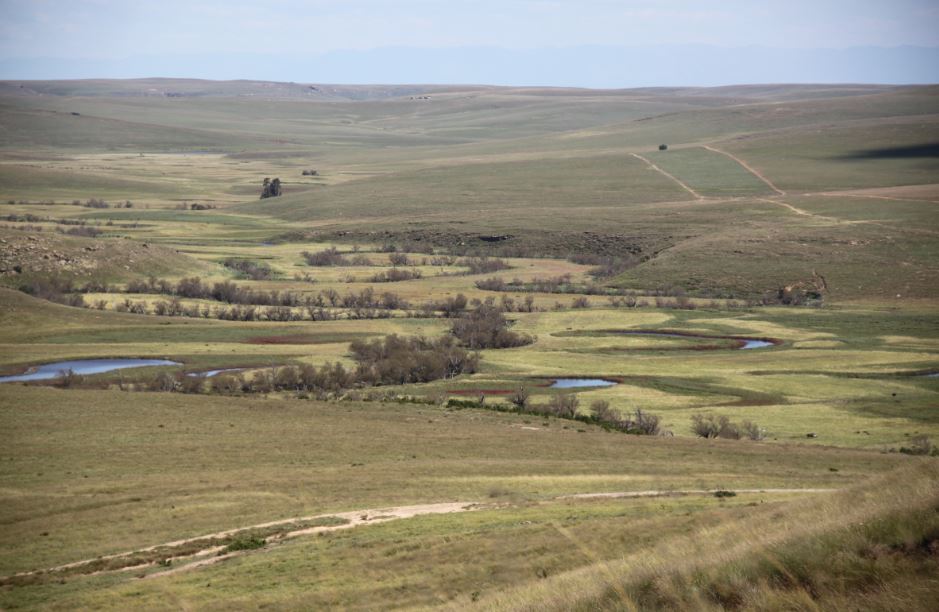 The Wilge River runs through the grasslands of the beautiful eastern Free State, an area that contains many threatened bird species and is an important water catchment. Its formal protection is a matter of urgency, which is why BirdLife South Africa and partners are undertaking the Wilge Stewardship Project.

Grasslands are not universally appreciated, especially in winter when they look bleak, brown and devoid of life. Even their male bishops, weavers and widowbirds have relinquished their colourful summer plumages and become rather drab. But if you look carefully, you will see flowers among the grasses; only one in every six plant species is a grass. Even so, hundreds of different grass species provide seeds for birds. Grasslands are home to mammals such as oribi, meerkats and caracals, as well as Blue and Wattled cranes, Secretarybird, Black Harrier, Denham’s Bustard and Blue Korhaan. They are important for other reasons too, such as being water catchment areas. Walk over a peat wetland and you will feel soggy ground under your feet, even though there may have been no rain for many months. Grasslands are crucial for preventing extreme water shortages.

BirdLife South Africa recognises the importance of grasslands by focusing many of its activities – such as the recently launched Wilge Stewardship Project – in this biome. In February 2016 the Ingula Partnership, between Eskom, Birdlife South Africa and the Middelpunt Wetland Trust, initiated a series of meetings that led to the launch of this project in the catchment of the Wilge River in the eastern Free State. The targeted conservation area borders the soon-to-be-declared Ingula Nature Reserve, which is also an Important Bird and Biodiversity Area (IBA). The 24 threatened bird species recorded in the area during SABAP2 indicate just how important this area is from a bird conservation point of view. A proposal to expand the Grasslands IBA southward to include this project area will be submitted for approval in the near future.

The Wilge Stewardship Project aims to persuade the owners of land totalling about 45 000ha to formally protect their properties by means of the biodiversity stewardship model. BirdLife South Africa will be the implementing partner and will be assisted by other NGOs, such as EWT and WWF, as well as the Free State Department of Economic and Small Business Development, Tourism and Environmental Affairs. Landowners supporting this initiative will agree to protect intact grasslands, remove alien trees, avoid overgrazing, keep to agreed burning regimes and manage the land in such a way that biodiversity benefits. The aim of the project is not only to formally protect these properties, but also to develop and implement management plans for the benefit of the biodiversity in the area. It will probably take a number of years to complete this project, but we believe it will make a significant contribution to the protection of grasslands and the species in them.