LAB 2016 in Kruger: a great opportunity to learn about birds, and great birdwatching opportunities

The biennial LAB, co-hosted by BirdLife South Africa and the Percy FitzPatrick Institute for African Ornithology, held at Skukuza, Kruger National Park (9 – 11 March 2016), offered a full programme. Presentations covered a variety of scientific and conservation-related topics, including summaries of research and report-backs on ongoing studies.

Two workshops began proceedings on the Wednesday, one on advanced bird identification by Faansie Peacock and another pertaining to bird photography by Albert Froneman. The official jam-packed programme got going on Thursday and ensured that attendees remained engrossed in the various discussion topics of both the Science and Layman’s LAB parallel programmes. Further highlights were the keynote addresses by Kruger stalwarts, Dr Ian Whyte and Dr Alan Kemp. Joe Grosel’s raptor and lark identification workshops proved very popular amongst the delegates and both were oversubscribed.

LAB 2016 was attended by nearly 300 delegates, a perfect opportunity for both the scientific and birding communities to talk about what we have in common, a passion and love for our birds. Photo: Albert Froneman

Apart from full days in the various lecture rooms, there was naturally time for some great Kruger birding.

Thanks to Henk Nel and Ernst Retief for setting up the BirdLife South Africa – Flock in Kruger 2016 BirdLasser challenge. Over the five days, 10 213 sightings were logged for 299 species and 101 full protocol atlas cards were submitted.These added significantly to the Southern African Bird Atlas Project 2 (SABAP2) dataset for Kruger. Two participants (Dylan Vasapolli and Jason Boyce, both from Birding Ecotours) managed to see more than 200 species each. A special mention must be made of the 43 teams and individuals who also participated in the challenge.

​
A trip report of the Skukuza area during Flock 2016, prepared by Jason Boyce of Birding Ecotours, can be downloaded here. Certainly the bird that got everyone dashing off was the Sooty Falcon seen near Lake Panic. Other Kruger specials seen included Martial, Tawny and Wahlberg’s Eagles, Saddle-billed Stork, African Openbill, White-crowned Lapwing, Bronze-winged courser, Mosque Swallow, Senegal Lapwing, Crowned Hornbill and Retz’s Helmet-shrike, amongst many others. 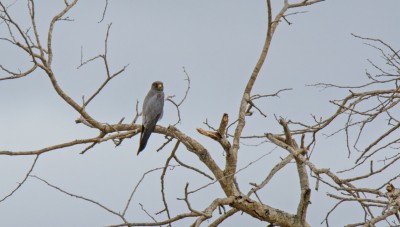 Thanks to all the bird guides and experts for sharing their exceptional skills and knowledge. Thanks are also due to the SANParks staff, Cattle Baron restaurant, SANParks Honorary Rangers: West Rand Region, Birding Ecotours, Tembele Birding Safaris, keynote speakers, presenters, BirdLife South Africa staff and all the volunteers, especially Gisela Ortner, for their supreme efforts and for giving us so much of their valuable time. Lastly, thanks to all the delegates for their support of the conference and for making LAB 2016 an undoubted success!