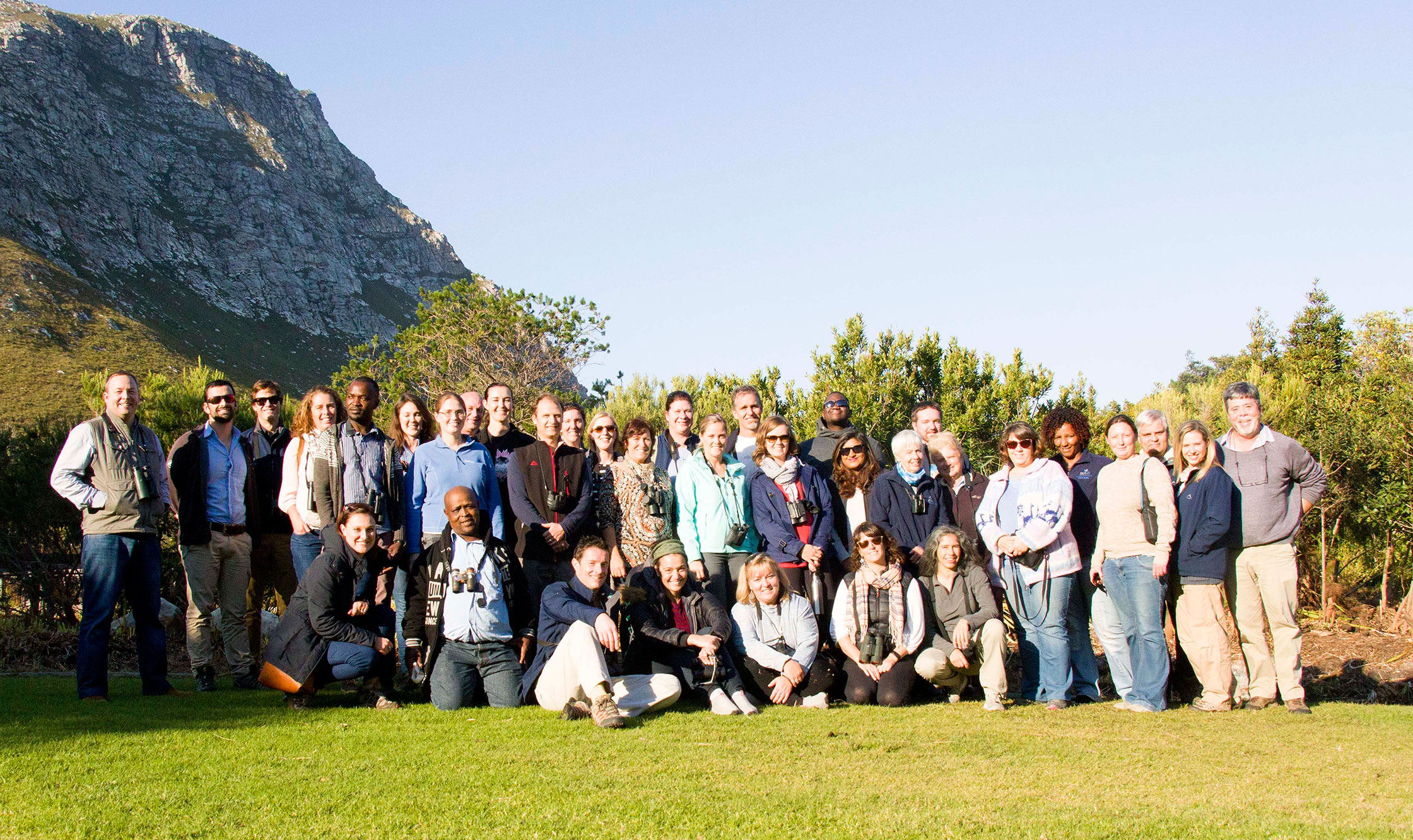 The BirdLife South Africa staff meeting, held from 23 to 25 May 2017, had a change of venue this year and took place at the picturesque Sea Villa Glen Craig Conference Venue in Pringle Bay, Western Cape. This annual meeting gives the 38 BirdLife South Africa staff and interns a chance to discuss the progress of the organisation, present their achievements over the past year and highlight areas that need attention going forward, as well as focus on current conservation work in the Terrestrial Bird Conservation (TBCP), Important Bird and Biodiversity Areas (IBA), Avitourism and Special Projects (ASPP) and Seabird Conservation programmes.

All the conservation teams have enjoyed successes over the past year. In the TBCP, Robin Colyn finalised suitable habitat models for threatened wetland and grassland species – the Critically Endangered White-winged Flufftail, the Yellow-breasted Pipit and the endemic Botha’s and Rudd’s larks – that now identify target areas for conservation efforts dedicated to these declining species. Sam Ralston, also in the TBCP, has completed the best-practice guidelines for assessing and monitoring the impact of wind energy facilities on birds in southern Africa and is spreading her knowledge and insights to other BirdLife partners in Africa.

The IBA team has continued to grow the IBA network with the inclusion of the newly protected Greater Lakenvlei conservancy into the Steenkampsberg IBA. Within the programme, Candice Stevens continues to drive the successful tax incentives for biodiversity stewardships project.

The Seabird Conservation Programme has sustained its successes in mitigating seabird bycatch in the fisheries industry through its partnership with Ocean View Association for Persons with Disabilities (OVAPD) to develop bird-scaring lines that are used from the back of trawlers and longline vessels. This partnership has resulted in a 97 per cent decrease in seabird bycatch and is a flagship project that illustrates how conservation efforts can benefit both people and nature. We were lucky enough to have the OVAPD team join us one afternoon to teach the staff how to build these effective bird-scaring lines. Staff members were separated into three teams with the challenge of seeing which team could accurately construct a bird-scaring line the fastest under the guidance of the experienced OVAPD team members. Everyone had tons of fun and walked away with a deepened respect for the difference that this work is making in the daily lives of the OVAPD team and the seabirds that are saved by these lines.

Martin Taylor of the ASPP presented on the progress made by the East Atlantic Flyway Initiative and the continued success of the community guides programme run by his colleague in the ASPP, Ian Owtram. Thought-provoking presentations on employment equity, alternative green economies and refining BirdLife South Africa’s social media strategy were also given by members of the core staff.

The staff meeting is designed not only to discuss the important work that BirdLife South Africa is doing, but also to bring the team together and build camaraderie while having fun. Two excursions were organised during the meeting: the first to the Harold Porter National Botanical Garden, where the team learned about the Fynbos biome and the endemic birds that live in it, and the second to the Stony Point African Penguin colony, where Taryn Morris and Christina Hagen of the Seabird Conservation Programme expanded on the important work they are doing to save South Africa’s penguins.

Team-building in the evening continued with a fantastic natural history quiz compiled by Ian and Martin that tested everyone’s birding, nature and organisational knowledge. The highlight was the charades section, where team members were asked to act out the name of an animal. A highly competitive game of ’30 Seconds’ the following night was another highlight of the week and showcased the broad base of general knowledge that the BirdLife South Africa team possesses. The staff meeting was a successful three days that facilitated good discussions on how to take BirdLife South Africa forward and how to continue giving conservation wings.