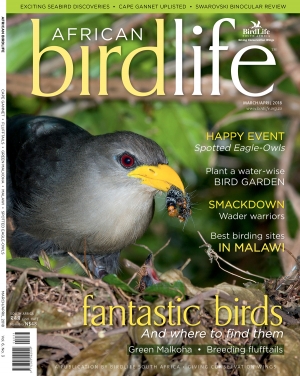 Fantastic birds and where to find them…

Plus your free Bird of the Year poster!

Green Malkoha at the nest

In a remarkable set of images, Hugh Chittenden shares his photographs of the Green Malkoha at the nest and documents the prey items brought to the young.

Encouraging conservation news about the White-winged Flufftail in South Africa, and an amazing sequence of photographs showing a pair of Buff-spotted Flufftails mating.

Malawi has plenty to offer South African birders: it is an easily accessible and budget-friendly destination and has a national checklist of 650 species in an area one-tenth the size of South Africa.

Numbers of the Cape Gannet have declined by more than 50 per cent in the past 60 years, resulting in the species being uplisted to Endangered.