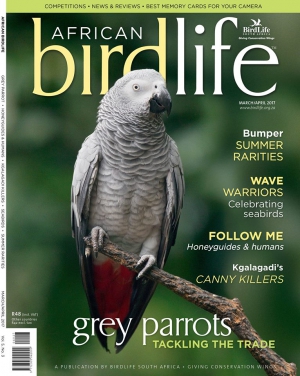 Subscribe to African Birdlife and you could win one of five copies of Faansie Peacock’s much-anticipated Chamberlain’s Waders: The Definitive Guide to Southern Africa’s Shorebirds.

Claire Spottiswoode investigates the mutually beneficial relationship between humans and the Greater Honeyguide in parts of Africa.

Some opportunistic birds in the arid Kgalagadi National Park have learnt to take advantage of other birds congregating at waterholes.

Rowan Martin of the World Parrot Trust discusses the steps being taken to protect the endangered Grey Parrot from the trade in the species that is so rife in some African countries.

To the edge and back

Flock at Sea 2017 promises to be the largest ever group of people birding together over a period of several days. Peter Ryan considers what attracts thousands of birders to gather for the mother of all pelagic birding trips.

In southern Africa we are privileged to have a relative abundance of birds of prey to enjoy and photograph. Albie Venter showcases some of his favourite images of these supreme hunters.