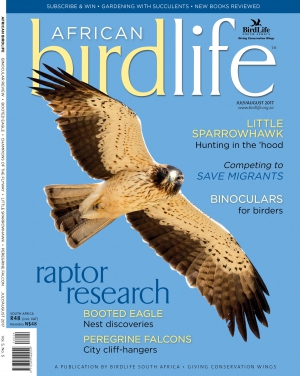 Bird of the Year 2017 Lappet-faced Vulture

Electricity transmission pylons can pose a deadly threat to large birds of prey such as vultures. Although the problem dates back more than half a century, we are nowhere near finding a solution.

Going all out for a duck

Tony Archer’s quest for the 800th species on his life-list turned into far more than he had bargained for.

In article written shortly before he died, Rob Martin looks back over 50 years of discovering that the Booted Eagle not only is a Palearctic migrant to South Africa, but also has a flourishing breeding population in the region.

Best of both worlds

Peregrine Falcons of the Cape Peninsula

Raptor researcher Andrew Jenkins allows us an intimate view of the raptors that he has studied and photographed for a number of decades.

Passionate about birds of prey and a dedicated field researcher, Dr Andrew Jenkins.

Observations of the hunting methods employed by a pair of Little Sparrowhawks, as well

as their interaction with other predators.

A review of some of the latest models of Zeiss binoculars.