Kamfers Dam is located 6 km north of Kimberley in the ecotone where three major biomes – Kalahari Savanna, Grassland and Nama Karoo – meet. The dam is natural in origin as it forms part of the central South African pan system known as the Highveld Salt Pans. It is an ephemeral (non-perennial), endorheic pan of c. 500 ha in extent, receiving water from its 160-km2 catchment, 30–40 megalitres of partially treated sewage effluent from Kimberley per day and half of the town’s storm-water runoff. Over the past 15 years it has been transformed from an ephemeral pan to a permanent wetland due to a steady increase in sewage effluent inflow.

The area around the pan is relatively flat, holding red-yellow, freely drained soils and areas of calcrete that cover the upper slopes and flats on the northern and north-western shore. Vegetation types present in addition to Highveld Salt Pan are Kimberley Thornveld and Vaalbos Rocky Shrubveld. The water’s edge on the pan’s southern shore is dominated by common reed Phragmites australis.

The partially treated sewage effluent has caused this aquatic ecosystem to become eutrophic and rich in phosphates and other minerals, resulting in the establishment of extensive reedbeds and sedges. The waterbody’s alkalinity has increased significantly. The sewage also promotes the growth of up to 26 species of phytoplankton (algae) in the dam, of which the blue-green algae Arthrospira fusiformis and diatoms Cyclotella spp. are usually the most abundant. As a consequence, this IBA supports large numbers of waterbirds. In such dynamic aquatic ecosystems, waterbird species and numbers change with fluctuating water quality and water levels.

Most of the terrestrial habitats remain in a natural state, with some transformation due to two railway lines, roads, farm buildings and a farm dam, sewerage works, an ash dump and eroded areas.

This IBA provides a reliable refuge for waterbirds in a semi-arid area where wetlands are scarce. Kamfers Dam regularly holds more than 20 000 birds. A special feature is the large numbers of Greater Flamingo Phoenicopterus roseus and Lesser Flamingo Phoeniconaias minor that are found throughout the year. This IBA supports probably the largest permanent population of Lesser Flamingos in southern Africa.

One protected endemic plant species, Titanopsis calcarea, is present in this IBA. 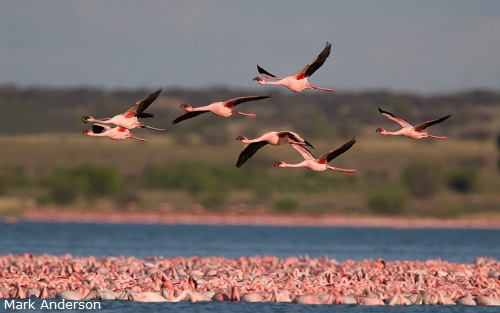 The most significant threats to Kamfers Dam are poor water quality and flooding. Water levels reached devastating proportions in 2010, causing millions of rands’ damage to two railway lines, the inundation of the flamingo breeding island and the loss of potential ecotourism income. The HWWTW regularly exceeds the water quality standards set by the DWA for the release of treated sewage. This was identified as a severe risk to the waterbody. Unacceptably high levels of nitrates and phosphates from untreated or poorly treated sewage effluent make the water eutrophic, resulting in toxic algal bloom events. The high concentrations of Escherichia coli and faecal coliforms in the water pose a significant health risk to potential water users.

Since early 2011, flooded shorelines have reduced the foraging area for waterbirds and waders that prefer to feed in shallower water and the littoral area. Changes in the average algal composition in 2012 from the usually dominant, blue-green algae population to a green algae (Mesotaenium) due to a decrease in water salinity (Roos 2012) resulted in a reduction in the Lesser Flamingo’s preferred food. The toxin-producing cyanobacteria Microcystis sp. was recorded for the first time in February 2012. This has been implicated as the cause of mass die-offs of flamingos in Kenya and Tanzania.

Botulism is a sporadic threat. Outbreaks have occurred in the past, the most recent incident, in 2013, resulting in the death of hundreds of waterbirds.

The expansion of urban development in Kimberley towards Kamfers Dam has become a recent threat, despite a conservancy area mapped as a green zone in the SPM’s Spatial Development Framework. There have been reports of people hunting and catching waterbirds on the southern side of the dam. Nearby power lines and the electrical transmission lines along the railway lines on the southern and eastern shores of the dam have resulted in collisions and mortalities of flamingos and other waterbirds.

The surrounding camel thorn Vachellia (formerly Acacia) erioloba savanna is vulnerable to overgrazing by game and the encroachment of invasive plants such as mesquite Prosopis glandulosa. At the dam edges the invasive sponge-fruit salt bush Atriplex inflata and the common reed are becoming dominant, reducing the foraging area for flamingos and waders that prefer open shoreline.

The lack of a proper management plan, in part the result of political apathy for the protection of this site, is cause for concern.

The major part (95%) of the IBA is privately owned; a small portion of land, c. 5% in the south-western corner, belongs to the SPM. The pan’s catchment is used for game and livestock farming. The IBA was declared a Natural Heritage Site in 1995 and a Ramsar application was made. The latter was unsuccessful due to the dam’s artificial water source and the lack of formal protection. The Flamingo Environmental Trust was formed in the 1990s to raise funds for the conservation of this IBA and to develop an environmental education facility.

Basic management guidelines on a suitable water level for Kamfers Dam were provided in a specialist study for the SPM after concerns were raised by the DENC about the increasing quantity and poor quality of sewage effluent released into the dam. The Spatial Development Framework, as part of the Integrated Development Plan for the SPM, recognised Kamfers Dam as a conservancy area worthy of conservation status for the first time in 2008.

Conservationists suggested that successful breeding events at Kamfers Dam could help reverse the Lesser Flamingo’s negative population trend. In response, an S-shaped breeding island was built by Ekapa Mining in 2006. Kamfers Dam became the first breeding locality in South Africa, only the fourth breeding locality in Africa and the sixth in the world for this species. Between 2007 and 2011 an estimated 24 000 Lesser Flamingo and 100 Greater Flamingo chicks hatched on the breeding island (Anderson MD, Anderson TA 2010). Towards the end of 2008 a webcam, sponsored by Nedbank and Africam, was installed on the island and the flamingo breeding activities were viewed online around the world. This was a useful tool for research on breeding behaviour and raising awareness for a few years. Unfortunately, the conservation celebrations were short-lived; the breeding island started to flood in November 2009 and was totally submerged by January 2011.

The Save the Flamingo Association was formed in 2008 to try to address the threats resulting from the dysfunctional HWWTW and the proposed Northgate urban development close to the western edge of the dam. It also aimed to protect the flamingos and Kamfers Dam through lobbying, advocacy and fundraising. As a result of sustained pressure by the association over several years, the SPM has repaired and partly upgraded the HWWTW, and the Northgate development was stopped.

Bi-annual water quality analyses were commissioned from 2008 to 2012 by the Save the Flamingo Association and since 2011 the SPM has contracted a water specialist to monitor water quality and try to achieve Green Drop water status. The pipeline to pump excess sewage effluent to another pan and then into the Vaal River was completed in December 2012. The SPM started using this pipeline in January 2014 and this is reducing the amount of sewage effluent that enters the dam and maintaining the water level at below the recommended maximum to prevent flooding.

In 2011, the Save the Flamingo Association proposed that Kamfers Dam be formally protected under the Biodiversity Stewardship programme, with a planned conservation servitude in the buffer zone to prevent future threats from urban development. The flooded island may be rebuilt if this is achieved. The landowners of the major portion of the IBA restrict human access to limit disturbance to the flamingos. This is not the case, however, on the southern side of the dam, where the land is owned by the municipality. This area needs to be secured properly to restrict access.

In 2012, the association negotiated with Transnet to replace broken and missing bird flappers and fit new bird flight diverters to the overhead electrical lines along the two railway lines on the edges of Kamfers Dam. Transnet sought specialist advice from EWT and has committed to monitoring the effectiveness of the newly fitted bird diverters.

BirdLife South Africa provided plans to the SPM and the Northern Cape DEDaT in 2010 for the construction of a viewing platform and bird hide on the eastern shore of Kamfers Dam, which is easily accessible from the N12. This will be constructed once funding has been sourced.

Roos JC. 2012. Water quality assessment of Kamfers Dam May 2012. Report produced by Water Quality Consultants for the Save the Flamingo Association, Kimberley.