This large area is centred on the towns of Volksrust, Wakkerstroom and Memel. The southern boundary extends to Newcastle and Utrecht, the northern boundary to Amersfoort and the western boundary to about 10 km east of Vrede. The area comprises gentle rolling hills on the South African plateau at an altitude of 1 700–1 800 m a.s.l. The hills are regularly interrupted by parts of the Mpumalanga Drakensberg escarpment, small ranges such as Gemsbokberg (2 095 m a.s.l.), Versamelberg (2 139 m a.s.l.) and Balelesberg (2 055 m a.s.l.) and higher peaks around Wakkerstroom such as Ntshele (2 291 m a.s.l.), Ossewakop (2 170 m a.s.l.), Kanonkop (2 112 m a.s.l.) and KwaMandlangampisi (2 266 m a.s.l.).

The area covers several catchments and holds many perennial rivers and wetlands. Five of these wetlands are of international importance and deserve the highest possible conservation attention. Wakkerstroom Vlei (27° 22′ S; 30° 07′ E), a proposed Ramsar site, lies at the north-western edge of the town of Wakkerstroom. The permanently wet centre of this 700-ha vlei is surrounded by a belt of sedge marsh that is often extensive and itself lies on permanently to seasonally flooded ground. This marsh grades into a narrow zone of sedge meadow and then into a large tract of wet grassland. The vlei contains very little open water; the largest area is in the north-eastern corner, close to the Amersfoort road.

The second wetland is Seekoeivlei Nature Reserve (27° 35′ S; 29° 35′ E), a Ramsar site situated in the north-eastern Free State near the town of Memel. The vlei consists of a floodplain holding numerous seasonally flooded oxbow lakes, which are drained by the Klip River, a tributary of the Vaal. The wetland area stretches northward for c. 20 km to where the Klip River floodplain narrows, making it the largest floodplain on the Highveld. The vlei holds much open water, often shallow, with extensive fringing vegetation and some relatively small patches of emergent vegetation.

Heyshope Dam (27° 00′ S; 30° 30′ E) is a large impoundment in the Assegaai River catchment of south-eastern Mpumalanga, located 60 km north-east of Wakkerstroom and about 30 km west of Piet Retief. Built for the transferral of water from the Usutu catchment to the Vaal catchment, it lies at an altitude of 1 300 m a.s.l. and, with a surface area of 12 000 ha, is the sixth largest storage dam in South Africa. The land surrounding the dam is mainly agricultural, used for the production of beef and maize, and two informal settlements, Driefontein and Kangema, adjoin the dam. The grass along the dam’s gently sloping shoreline is either severely grazed or grows rank along with weeds.

The privately owned Vanger Natural Heritage Site (27° 52′ S; 29°40′ E), which lies c. 30 km south-east of Memel, supports the fourth important wetland. About 2 km long, this permanently flooded wetland is fringed by vegetation that was once heavily grazed but is now being allowed to regenerate. In terms of the richness of its palustrine wetland habitats, this site is probably better than most high-altitude wetlands in South Africa and should be regarded as significant in national and global terms. The fifth important wetland is Blood River Vlei (27° 47′ S; 30° 35′ E), which lies 20 km south-west of Vryheid. Several other small but significant wetlands are scattered throughout the IBA.

The area receives summer rainfall, averaging between 635 and 1 400 mm p.a. The amount depends on the local topography, with most rain falling on the escarpment. The terrestrial vegetation matrix is dominated by some of the finest rolling grasslands remaining in South Africa.

Of the terrestrial birds, the core populations of most of South Africa’s threatened and endemic grassland species are centred on the IBA. An estimated 85% of the global population of Rudd’s Lark Heteromirafra ruddi is thought to occur within the IBA. Although this lark ranges throughout the site, it is highly localised in open, moderately to heavily grazed level grassland, without forb invasion. It prefers hill tops or plateaus and favours trampled areas. 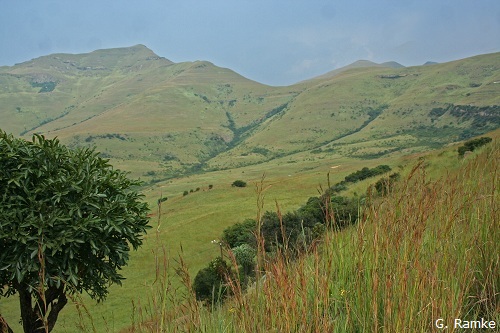 North-eastern mountain grassland holds 78 endemic and near-endemic plant species, mostly in the Liliaceae, Iridaceae, Asteraceae, Lamiaceae and Orchidaceae families, on Black Reef quartzites. A further 31 endemics are found on dry dolomites. Most of these endemics are present in this IBA. The rare rock barbel Austroglanis sclateri is reported from the region. Giant girdled lizard Cordylus giganteus occurs on some of the farms and rough-haired golden mole Chrysospalax villosus, serval Felis serval, African striped weasel Poecilogale albinucha and Warren’s girdled lizard Cordylus warreni range throughout the region. Laminate vlei rat Otomys laminatus and many-spotted mountain snake Anplorhinus multimaculatus have been recorded in the grassland areas near wetlands. Natal red rock rabbit Pronolagus crassicaudatus occurs on the rocky outcrops and in upland areas. The extremely rare striped harlequin snake Homoroselaps dorsalis and Zulu golden mole Amblysomustris may occur within this large blanket area. The streams in the forested areas of the south-eastern section of the IBA may hold Natal ghost frog Heleophryne natalensis.

This extremely valuable IBA is under considerable threat from a number of quarters. Applications to prospect and mine in the area are received regularly, sometimes on land bordering formally protected areas. If these applications were to be approved, they could have a negative impact on the region as a whole. Some are applicable to water catchment areas, in which case the impact of the mine would be felt downstream and beyond the IBA’s borders. Other threats include inappropriate farming practices such as burning too frequently and at the wrong time of year, excessive grazing, the ploughing of new veld and the damming and draining of wetlands.

Three protected environments have been declared in this IBA: Mabola, KwaMandlangampisi and Pongola Bush. The declaration of the Sneeuwberg Protected Environment is currently in progress. Management plans for these protected environments are being drafted or have been finalised. These initiatives greatly improve the conservation status of this area, providing protection against mining and assisting landowners to manage the grassland on their farms for particular species or communities of birds. Other nature reserves in the area are Wakkerstroom Wetland, Pongola Bush, Paardeplaats, Tafelkop and Seekoeivlei. There are also a number of private nature reserves nearby.

This IBA is extremely important from a biodiversity point of view and is considered to be one of the most important sites in the IBA network. However, it faces numerous threats, and initiatives to improve the conservation status of the land and to assist landowners to improve their land management, for example by implementing correct burning and grazing practices, must continue.

Staff members of the BirdLife South Africa Wakkerstroom Tourism and Education Centre are actively involved in environmental education and community conservation projects in Wakkerstroom and across southern Mpumalanga.

The WWF-SA Enkangala Grasslands Project has been operating in Wakkerstroom for the past decade. Established to develop ways to use land more sustainably without causing further damage, the project aims to work with local landowners and other partners to secure and maintain the ecological integrity and cultural heritage of this important area. Innovative mechanisms are being developed to secure the grasslands’ biodiversity and the relevant ecosystems’ goods and services. The project team is working closely with key stakeholders in the area, including commercial farmers, emerging farmers, land-reform projects and business to get the necessary buy-in and ensure that its activities are supported and approved by key land users.

Herholdt JJ, Grobler NJ. 1987. Field notes on the identification of Botha’s Lark, Pink-billed Lark and Rudd’s Lark in the Orange Free State, with notes on their habitat. Mirafra 4: 61–62.

Stoltz LP, Geyser B. 1973. The distribution of ibises in the Orange Free State with reference to the status of the Bald Ibis. Unpublished report. Bloemfontein: Department of Nature Conservation.

Taylor PB. 1997a. The status and conservation of rallids in South Africa: results of a wetland survey in 1995/96. ADU Research Report No. 23. Cape Town: Avian Demography Unit, University of Cape Town.