Advocating for our birds and their habitats 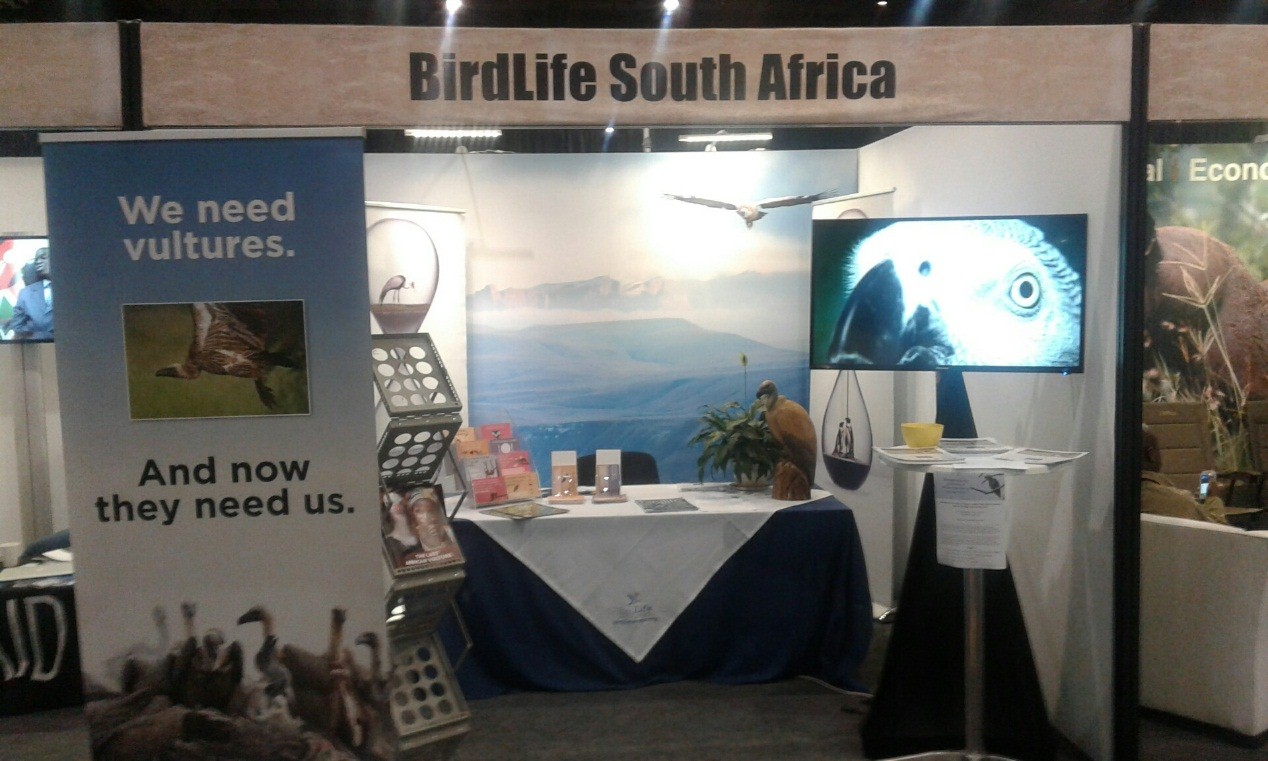 2016 seems to have been an eventful year for everyone with whom I have chatted and it’s been no different for the Policy and Advocacy Programme. We provided extensive support to our partners through the IUCN, worked with BirdLife International and the World Parrot Trust to advocate for the uplisting of African Grey Parrots at the CITES CoP17 and are currently collaborating with a plethora of talented and committed people and organisations to improve the lot of African vultures.

An undoubted highlight of the year was the CITES 17th Congress of the Parties (CoP17), which was held at the Sandton Convention Centre in Johannesburg from 14 September to 3 October. Along with other members of the BirdLife South Africa team, the Policy and Advocacy Programme took part in a number of events.

In partnership with the World Parrot Trust, BirdLife South Africa took a stand at the exhibition, where we focused on two key areas of advocacy – the uplisting of the African Grey Parrot to Appendix I and the potential uplisting of vultures at the next CoP – and advertised the general work of the organisation with a wide range of pamphlets and free copies of African Birdlife magazine. We also took part in a number of side events, providing logistical support for a panel discussion on vultures and speaking about tackling the illegal trade in Helmeted Hornbills (Simon Gear) and the birds of South Africa (Mark Anderson). Simon and Hanneline Smit-Robinson attended the World Parrot Trust’s side event concerning the uplisting of the African Grey Parrot.

From an advocacy point of view, issues pertaining to the African Grey Parrot, the Peregrine Falcon and the Helmeted Hornbill were discussed. All three issues are critical and are encompassed in BirdLife International’s work. In the case of the African Grey Parrot, the proposal to uplist the species from Appendix II to Appendix I was accepted, with support from the West African range states, the EU and the USA. BirdLife South Africa helped in the preparatory discussions, working alongside the World Parrot Trust to engage the Parrot Breeders’ Association and the South African government. We now look forward to liaising with local parrot breeders and the Department of Environmental Affairs on the implementation of this decision.

In October, Simon represented BirdLife South Africa at the Pan-African Vulture Summit (PAVS), which was held on the sidelines of the Pan-African Ornithological Congress in Dakar, Senegal. Scientists, members of civil society and government officials involved in the conservation of vultures in Africa and Asia took part, aiming to develop an Africa-wide response to the current vulture crisis, including a Multi-Species Action Plan and a broader African Vulture Conservation Strategy. The summit was a rare opportunity for almost all the significant players in vulture conservation to thrash out how best to go about saving the African species. Some papers were presented in the general forum, but most of the real work was done in the workshop. The main outcome will be a continent-wide conservation plan for African vultures, to which BirdLife South Africa’s own Vulture Action Plan will be aligned.

CoP17 and the PAVS aside, Simon continues to represent BirdLife South Africa on the national committee of the IUCN, where he is advising regional decision-makers on how the IBA network could fit into the proposed Key Biodiversity Areas network. This ongoing work is being informed by BirdLife International’s stance on the issue.

As part of its day-to-day activities, the Policy and Advocacy Programme spent much of the year responding to Environmental Impact Assessments on behalf of the conservation managers in various provinces and supporting the work relating to biodiversity stewardship that is conducted by the IBA team. A highlight was facilitating Candice Stevens’ attendance at the IUCN’s World Conservation Congress in Hawaii, where she reported on her work on the tax implications of biodiversity stewardship in South Africa.

In other IBA-related work, in the Eastern Cape Simon reviewed the Karoo Fracking Strategic Environment Assessment and confirmed that the Karoo National Park, Camdeboo National Park, Amatole Forest Complex and Platberg Karoo Conservancy IBAs were explicitly excluded from the prospecting area. He also responded to Environmental Impact Assessments (EIAs) concerning sand mining adjacent to the Camdeboo National Park. In the KwaZulu-Natal Mistbelt Forests IBA he responded to EIAs relating to gas exploration, a water scheme and a quarry in Ixopo.

On the Highveld, Simon continues to work very closely with the conservation manager, Ernst Retief, in responding to mining applications. There have been some areas of success (it appears that the coal and diamond mining applications around the Middelpunt Wetland area may be withdrawn) and some hurdles (the Mabola mine on the edge of the Grasslands IBA looks set to progress). In Limpopo, the Nyl River Floodplain IBA and the Waterberg System IBA appear to be coming under increasing pressure from development and mining respectively, while in Mpumalanga the Chrissie Pans IBA remains besieged by applications for mining rights. We are working hard to ensure that this Protected Environment remains off limits to extractive development.

In the Western Cape, the Policy and Advocacy Programme has provided support to area managers in the face of development applications around the West Coast National Park and the Olifants River Estuary. It continues to be active in the multi-organisation Safeguard our Seabed coalition, which opposes phosphate mining in marine IBAs. Although renewable energy applications fall mostly outside IBAs in the Northern Cape, the cumulative impact of such operations may impact bird species moving from one protected area to another. The programme has responded to many of these applications, with a recent focus on submissions relating to concentrated solar power, which have seen huge growth in the far north of the province.

A huge thank you goes to all the friends and colleagues who have helped make this year a success, and in particular the RSPB, without whom our Policy and Advocacy programme would not exist. It has been a busy but exciting year and I cannot wait to see what 2017 holds.