Situated near Aggeneys, this IBA is characterised by an arid landscape of extensive sandy and gravel plains with sparse vegetation scattered between bare sand patches. Inselbergs form islands of rocky habitat in a sea of red sand. Large sand dunes fill the fossil course of the Koa River. The gravel plains are covered by sparse dwarf shrubs and short bushman grasses and they hide dwarf succulents. The dry riverbeds support taller woody vegetation, including smelly shepherd’s tree Boscia foetida.

The IBA falls within the Bushmanland Bioregion and three biomes (Desert, Nama Karoo and Succulent Karoo) are represented. Seven vegetation types are present, of which one is Endangered. One Endangered and two Vulnerable habitat units within these are considered irreplaceable.

Although much of the land area remains natural, large areas are overgrazed and degraded. Approximately 90% of the land is natural and utilised for ranching. The rest has been transformed by agriculture, mining activities, homesteads, settlements, erosion, roads and power-line servitudes.

This IBA is one of only a few sites protecting the globally threatened Red Lark Calendulauda burra, which inhabits the red sand dunes and sandy plains with a mixed grassy dwarf shrub cover; and the near-threatened Sclater’s Lark Spizocorys sclateri, on the barren stony plains. It also holds 16 of the 23 Namib-Karoo biome-restricted assemblage species as well as a host of other arid-zone birds.

At the time of this IBA’s assessment, its 27 pentads had been poorly atlased for SABAP2. The total number of species recorded for the IBA is 198.

The IBA is seasonally important for nomadic larks, such as Stark’s Lark Spizocorys starki, and sparrow-larks, which are abundant after good rains.

This IBA is one of only a few sites protecting the globally threatened Red Lark Calendulauda burra, which inhabits the red sand dunes and sandy plains with a mixed grassy dwarf shrub cover; and the near-threatened Sclater’s Lark Spizocorys sclateri, on the barren stony plains. It also holds 16 of the 23 Namib-Karoo biome-restricted assemblage species as well as a host of other arid-zone birds.

The SABAP2 coverage for the 27 pentads covering this IBA is poor (40%), with fewer than 20 atlas cards. The total number of species recorded for the IBA is 198, and 101 species have been recorded in SABAP2.

The IBA is seasonally important for nomadic larks, such as Stark’s Lark Spizocorys starki, and sparrow-larks, which are abundant after good rains.

Approximately 35 threatened, rare and endemic plant species occur in the IBA, most of which are dwarf succulents and geophytes. There are two known populations of the near-endemic halfmens Pachypodium namaquanum, as well as many quiver trees Aloe dichotoma (Vulnerable). 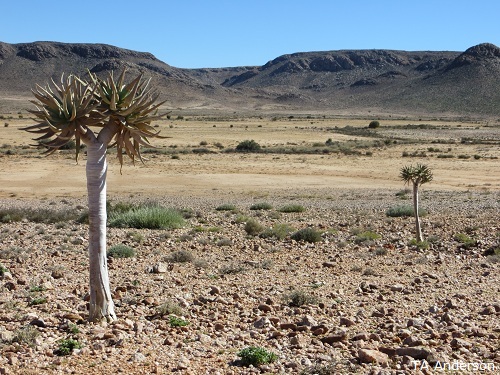 Renewable energy developments are a new threat placing pressure on this IBA. Four solar energy facilities and wind farms within and adjacent to it have been approved or are in the application phase. Little is known about the impacts of solar farms on the IBA’s trigger species. Possible impacts on birds are loss of habitat, breeding disturbance during construction and collisions with power lines and reflective solar panels. Concentrated solar plants with power towers may also result in solar flux injuries to birds. Wind farms can displace endemic larks. Large trigger species such as Ludwig’s Bustard, Martial Eagle and Verreauxs’ Eagle are highly susceptible to collisions with wind turbines.

There is a history of overstocking in this region and within the IBA, which has led to degradation of habitat. Many ranchers trying to make a living on properties that are economically unviable overexploited the vegetation. Trampling by cattle added to the reduction in vegetation cover and caused erosion and the shifting of dunes. Approximately 75% of optimal habitat for the Red Lark has been lost over the past 100 years. The disappearance of the Red Lark from ranches where dune grassland has been replaced by ephemerals is probably linked to the reduction in grass awns for nesting, shelter and invertebrate and plant foods.

In recent years, there has been a shift from cattle ranching to raising sheep and goats on many farms in the region. However, overstocking and overgrazing continue to pose a threat in large parts of the IBA.

There is a serious threat from climate change. It is predicted that temperatures will increase and rainfall decrease sharply in arid areas such as Bushmanland. Locally resident endemic larks, in particular, are at risk. Vegetation change will have marked effects on species such as the restricted-range, habitat-specific Red Lark. Increased CO2 can lead to the increase of C3 plants (shrubs) at the expense of C4 plants (mainly grasses), causing a shift in vegetation diversity and structure and making habitat unsuitable for some species. It is expected that the Red Lark will not meet the challenge of global warming.

Droughts are expected to become more severe as a result of climate change, and birds will have to cope with greater food variability, unsuitable habitats, different predators, parasites and diseases, and competition. Nomadic species, such as Stark’s Lark, may find it easier to cope, only having to decide where to go. But resident species, like Sclater’s Lark and Red Lark, are more likely to remain in their patch and use available resources as best they can. Large, mainly resident species that depend on rainfall are also at risk. They would include territorial eagles, such as Verreauxs’ Eagle and Martial Eagle. Certain behavioural traits of these birds, such as extended parental care and slow reproductive rates, are likely to increase their vulnerability to climate change.

Other significant threats are the development of new mines in and adjacent to the IBA, the expansion of irrigation along the Orange River, the extensive invasion of mesquite (Prosopis sp.) along the Orange River banks and drainage lines, and new power lines and transmission lines from substations to renewable energy facilities.

The lack of monitoring, formal protection and a management plan for this IBA is cause for concern.

Currently no part of the IBA is formally conserved. Recommendations were made in 1992 that a bequest, under the administration of WWF-SA, be used to purchase land in this region for formal protection. However, this opportunity was lost.

Sections of this IBA are privately protected in the Black Mountain Mine Nature Reserve and on the farm Haramoep, covering approximately 23 000 ha of mine holdings around Aggeneys. All livestock was removed from these farms to reduce grazing impact and game species were introduced into the nature reserve. However, these fragmented conservation areas are not sufficient to maintain viable populations of many of the trigger species represented.

Black Mountain Mine, owned by Vedanta Resources, must establish a 30 000-ha biodiversity offset to compensate for the loss of biodiversity as a result of the mining of the neighbouring Gamsberg inselberg. The area recommended for this offset includes a large part of this IBA and it must be formally protected under NEM:PAA. Future considerations for conservation action include extensions to this IBA and linkages to the Mattheus-Gat Conservation Area (SA034) and Bitterputs Conservation Area (SA036) IBAs.

Dean WRJ. 1995. Where birds are rare or fill the air: the protection of the endemic and nomadic avifaunas of the Karoo. PhD thesis. Percy FitzPatrick Institute of African Ornithology, University of Cape Town.

Dean WRJ, Barnard P, Anderson MD. 2009. When to stay and when to go: trade-offs for southern African arid-zone birds in times of drought. South African Journal of Science 105: 24–28.

Dean WRJ, Lombard AT. 1994. The protection of nomadic birds in the semi-arid Karoo: the problems of stochastic rainfall and patchy habitat use by larks. Journal für Ornithologie 135: 281.

Dean WRJ, Williams JB. 2004. Adaptations of birds for life in deserts with particular reference to larks (Alaudidae). Transactions of the Royal Society of South Africa 59(2): 79–91.

Du Plessis MA. 1992. A strategic plan for the conservation of the avifauna of the Western Cape region, South Africa. A report to the Southern African Nature Foundation. Cape Town: Percy FitzPatrick Institute of African Ornithology.

Categories
Search
Recent Blog Posts
Go to Top
Protect yourself and others by staying at home. For more information and support on COVID-19 please visit www.sacoronavirus.co.za